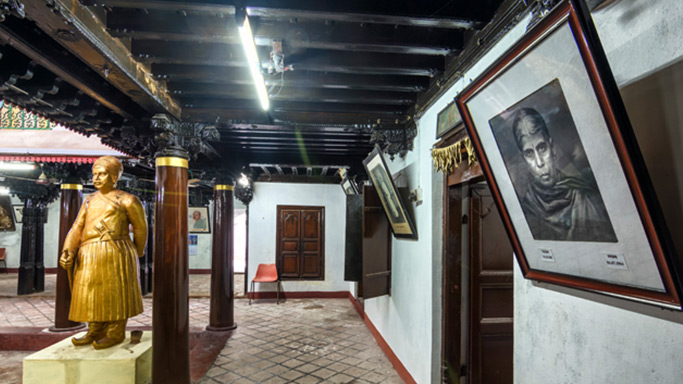 Rangapillai Museum is found in the Mahatma Gandhi road of Pondicherry town. During the early ages, it was a mansion of Ananda Rangapillai. His mansion in Pondicherry has been recognized as a heritage monument. He was a translator to Dupleix, the former Governor-general. Dupleix was the Governor of Pondicherry during the French establishment in India.

Ananda Rangi Pillai worked as a Chief translator and intermediary between Indian and European merchants for Dupleix during French establishment.

Mansion was called as the native quarters. It is the old surviving building in Pondicherry. The museum was started probably by the year 1738. Pillai’s journals and diaries written during French rule in Puducherry functioned with an excellent supply of historical data and a few ancient period.

The architecture of the museum is a collaboration of Indian and French style of designs. Though the previous glory of the building is not present, the monumental significance of the museum plays a vital role in the city of Pondicherry.

The amazing display of ornamental carvings on tables and stately doors can be seen while visiting the museum.

When Ananda Rangapillai died, his diaries came to the control of his nephew Tiruvengadam Pillai. To tell about Rangapillai, Tiruvengadam has maintained a series of records by his own from the beginning of 1770.

Then the records were disposed of by the upcoming generations. The worn out manuscripts were then collected by the Mayor of Puducherry. In 1846, the Mayor of Pondicherry is an intellect of all oriental languages.

The old manuscripts were translated to French by the mayor. Then it is extended to volumes of books. Ananda ranga Pillai’s diary was also found. The diary is very useful to know about his history and ancient organisations of French in India. Pillai’s collection of diaries and ancient photographs, Gothic style architecture serves as a museum in Pondicherry.

Rangapillai Museum is a popular tourist spot in the Pondicherry town. It is found opposite to the grand bazaar on the Ranga Pillai street.

The ground floor is built with a spacious courtyard with wooden pillars. It was built centuries back and it is still preserved.The museum typically resembles a Tamil House. The first floor is equipped with a terrace that is purely designed with ancient gothic style.

When some other buildings were destroyed by the British, the museum stood unique and is not damaged by them. Rangapillai Museum features a nice collection of diaries which serves as a storehouse of information of 18th century French India.

It has lots of information about the French in India. French particularly made an impact in Pondicherry. Even now some of the streets in the white town are named in French. The architecture is the amazing and attractive part in the Rangapillai Museum.

Save money on your trip in Tamil Nadu with Hotel Pondicherry
We are glad to help you find, book and experience Tamilnadu in its many dimensions while retaining your own individualistic idea of travel.

Madurai
Get the best deals and special offers with Hotel Pondicherry

Sign up now to receive the best deals, discounts and special offers for Tamil Nadu
Hotel Pondicherry hates spam, your email address is safe with us.

Other Destinations
Get in Touch!
Stay Connected
Copyright All Rights Reserved LCWA ©